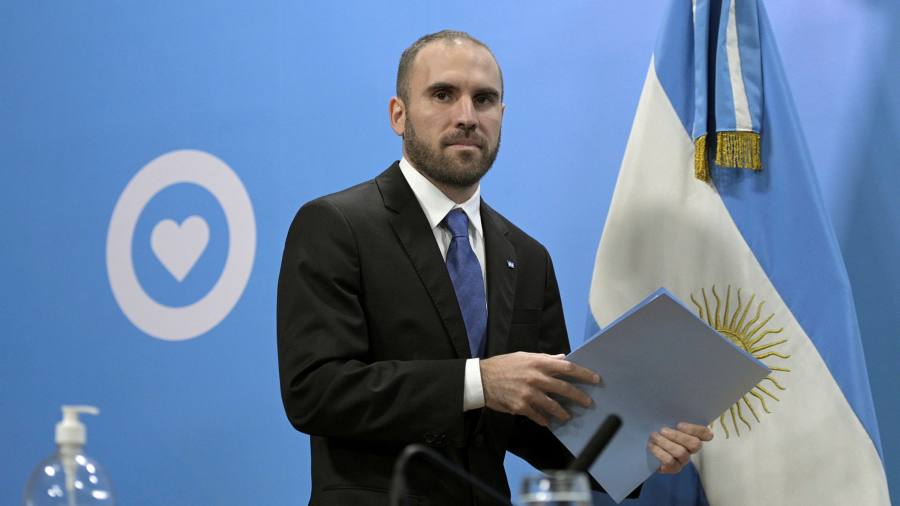 Argentina’s economy minister played down the prospects of an early deal with the IMF to repay a controversial $44bn loan, as the country’s year-old leftist government tries to build a domestic consensus on how to end its economic crisis.

After successfully restructuring $65bn of foreign debt with private creditors in August, the government’s attention has turned to talks with the IMF, which began this month. Markets hope this will lead to a new programme that could help to reverse a crisis of confidence that has stoked fears of an imminent devaluation of the peso.

“We are fine. We have the instruments to maintain [exchange rate stability],” insisted Martín Guzmán, economy minister, in an interview with the Financial Times. He argued that there was no need for Argentina to seek further help from China, after the central bank renewed a currency swap deal with the Asian country for $19bn in August for another three years, to bolster alarmingly low foreign exchange reserves.

“The most important aspect is to get [the new programme] right. We want to move at a solid pace but require common understanding and legitimacy. We are not going to rush this,” added the 38-year-old economist.

A deal by March or April “would certainly be acceptable”, he said. “That doesn’t mean it won’t come before that, but there are no guarantees.”

The negotiations with the IMF come as Argentina seeks a way out of a three-year long recession. That downturn began after a currency crisis in 2018 that prompted the fund to come to the rescue with a record-breaking $57bn programme — making Argentina the institution’s biggest debtor by far. The recession was made worse by the coronavirus crisis, which prompted the government of President Alberto Fernández to implement one of the longest and strictest lockdowns in the world.

Mr Guzmán spoke from his offices opposite the presidential palace in Buenos Aires over the din of tens of thousands of rowdy Argentines who had gathered to pay their respects to Diego Maradona, the legendary footballer who died on Wednesday. The economy minister played down calls from independent economists for Argentina to seek further cheap financing from the fund.

“We have to be very careful when borrowing in foreign currency,” he said, warning that exports had been weak over the past seven years, a key factor in the sustainability of Argentina’s debt.

But some say the alternatives are worse: unable to borrow on the international capital markets, Argentina is forced instead to resort to covering the bulk of its expenditure through new money printed by the central bank, which pushed the monthly inflation rate up to 3.8 per cent in October.

Nevertheless, Mr Guzmán said that it would be “beneficial” to secure more funding from other multilateral institutions such as the World Bank and the Inter-American Development Bank, especially to finance public infrastructure projects.

As Argentina prepares to embark on its 22nd programme with the IMF over the past six decades, Mr Guzmán insisted that austerity — the linchpin of most of those programmes — was not the answer to the economy’s woes.

“The 2018 programme was based on that same tenet and it didn’t work. The evidence is overwhelming that fiscal adjustments in recessions don’t work — and it’s not what we’re doing,” he said.

Mr Guzmán insisted that restoring order to Argentina’s fiscal accounts did not mean reducing spending. In fact, Argentina was increasing spending in real terms in high-impact areas, he said.

Similarly, Mr Guzmán pledged that a devaluation was not on the cards, although he admitted that the gap between the official and parallel exchange rates was a problem. “It will take time [to fix], as we can’t remove capital controls [yet],” he said, pointing to the need to accumulate foreign exchange reserves first.

“When you look at the trade numbers, the official exchange rate is at the right level . . . the situation with the [parallel exchange rate] is to do with financial flows that have nothing to do with the real economy,” he said, adding that “the IMF understands that a devaluation would have destabilising consequences at an economic and social level”.

Mr Guzmán also rejected accusations by some analysts of inconsistencies in economic policy, which they say are caused by contrasting priorities among the ruling coalition that ranges from pragmatic centrists to more ideologically driven members on the hard left.

Recent overtures to the private sector by Mr Guzmán — based on an understanding that sustained economic growth requires private investment — conflict with anti-business moves from other players in the coalition, notably the country’s Congress. Critics point to a law aimed at preventing shortages, a wealth tax going through Congress and a scathing letter sent to the IMF by a group of senators loyal to Cristina Fernández de Kirchner, the powerful vice-president.

“It all goes in the same direction,” insisted Mr Guzmán.

“In a crisis in the context of a pandemic, the state plays an important role to protect the most vulnerable and co-ordinate actions to maintain stability — but that is a role that will no longer be necessary in an economy that has restored macroeconomic stability,” he said.

Achieving sustained economic growth in the longer term once the economy has been stabilised is perhaps Argentina’s greatest challenge, however. Mr Guzmán highlights the importance of developing domestic capital markets in order to allow greater saving. That would in turn allow greater investment by the private sector, which he hopes will become “a fundamental engine for the economy”.